My Story - How I found Vielight

What I witnessed as a nurse!

I have worked for years as a nurse in nursing homes caring for people with dementia, Alzheimer’s, traumatic brain injuries, strokes and Parkinson’s.

I witnessed a hopeless existence day after day, month after month, and year after year with their quality of life diminishing. It was so saddening.

Then my sister felt prey to dementia, and I felt helpless, and I imagine you would too with your family member or friend.

In search of an answer and a better way to help!

I searched for answers and new discoveries, and I was so frustrated with what I saw.  But then, one day, I attended a Quantum medicine congress in Hawaii, and I met with Mr Lew Lim, the inventor of an incredible new device called Vielight.  I shared about my sister who was suffering from severe dementia at 60 yrs of age and that we were very concerned and overwhelmed by her deteriorating state of health. He was very sympathetic, and shared his own stories of why he worked so hard to create a solution.

He recommended using the Vielight 810 model.  We purchased one, and after 6 months of my sister using the Vielight device for 25 minutes, twice a day, to our surprise and absolute delight, all her symptoms were reversed!!!  Wow! THIS WAS AMAZING.

SHE NOW HAS A LIFE.

This is a truly phenomenal outcome…and best of all…2 yrs on she is still happily alive, enjoying her life, and using her Vielight device to maintain her health.

My friend who was on a downhill spiral with Parkinsons

A friend of mine, Max, who had been suffering after being diagnosed with Parkinson’s for the last 7 years is currently using the Vielight Neuro Gamma device, and after only 8 weeks has improved so much. He can now play his guitar, write, have proper conversations, walk upright and straight. His memory has improved, he wakes up in the morning and gets out of bed to brush his teeth without feeling like a plank. He has more energy during the day and less mood swings. He said “I feel alive again” and he has already recommended Neuro Gamma to his colleague. His neurologist is really happy to see his improvement.

Obviously NOT his time to die

Pete decided to move to Devonport for a slower peaceful life preparing to die gracefully.

But, it was definitely not his time to die, because he met a new GP doctor who recommended that he should talk to Michael*, a gentleman, who lived nearby, who has had good results using a Vielight Gamma device.  Pete took the doctor’s advice, and went to Michael’s* house everyday to use his Vielight Gamma device. ( Michael* – Is not his real name, it has been changed for privacy reasons. )

His results with Vielight were astounding!

At the end of his first session his hand tremor stopped. Within 6 months of using Vielight Gamma he could walk, have conversations, remember names, faces of his children and that of family and friends. Eighteen months on, he is calm and happy.  No more anger outbursts, can drive again, play his guitar in a band, laugh, sing, dance and resume his passion for outdoor activities. His dementia marker went from 6 to 27 [from poor to almost normal])

He was in tears when he gratefully shared  “I have my life back. I can do anything I want.”  He is now busy sharing his healing journey and his Vielight Gamma device with others who are suffering from similar debilitating symptoms.

Our conventional medicine offers no cure and yet at the same time dismissed this photobiomodulation therapy  as a no go Zone for sufferers and their loved ones to explore.

I, on the other hand, having witnessed the incredible healing and change, I can only ask:  “What could you possibly have to lose by trying the device, when there is the possibility of gaining your quality of life back? ”  I was so happy to see my own sister regain her quality of life!

LINKS TO INTERVIEWS WITH SCIENTISTS and researchers

These links are useful:

There are more research information and you can easily find them on the Vielight.com.

“When you deliver near-infrared photons to that brain cell, the nitric oxide is pushed outside the cell wall, and that promotes increased blood flow, which is what you want in an area that’s damaged,” said Naeser. “And that’s what we see on our MRI images, the increase in blood flow targeted to where we put the light photons. I couldn’t believe it. I was shocked.”

In addition to priming blood flow in the brain, light treatments seem to boost the brain’s autoimmune response to amyloid beta, the proteins that form the crippling plaque deposits found in Alzheimer’s. In a healthy brain, immune cells called microglia are tasked with clearing out excess amyloid beta. In an Alzheimer’s brain, microglia undergo a dangerous transformation. They not only stop attacking amyloid beta, but secrete a toxin that damages healthy brain cells.

“These are people with dementia symptoms, who haven’t been able to speak in connected sentences for weeks or months who suddenly start having a conversation, speaking in full sentences, understanding and replying,” Hamblin told Seeker. “People who had to be fed by caregivers can suddenly pick up a knife and fork and start eating their own meals. Remarkable changes.“ 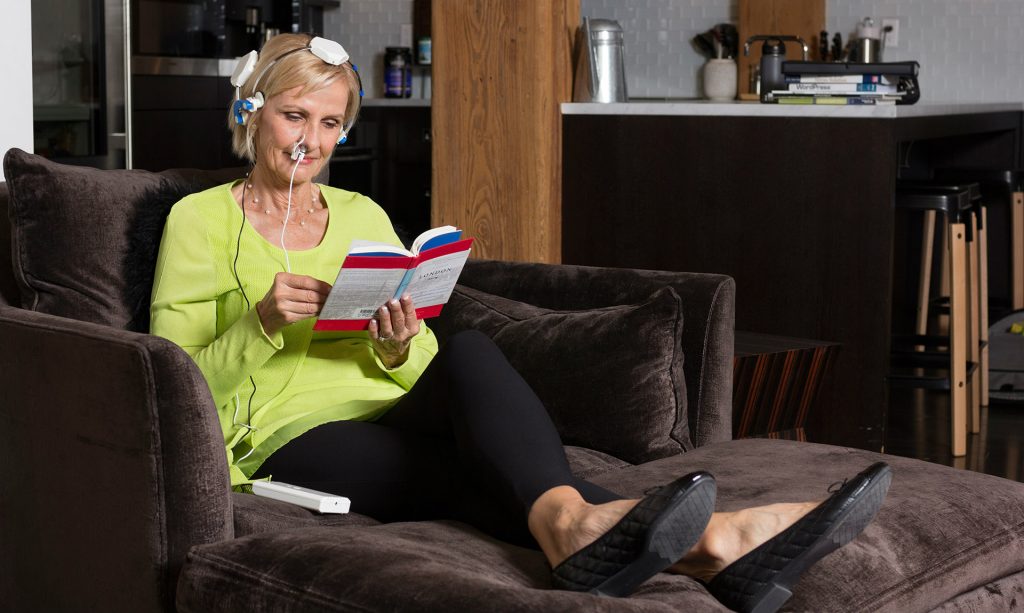 I would like to offer the same opportunity for you to give it a try for your family member, friend or yourself.

Please contact us here for an appointment, to discus the appropriate Vielight Device for your needs.

We are so confident that you will get amazing results with the Vielight.  If you are not happy with the improvements, just return the device and we are offering a 80% refund, up to 6 months from purchase date. (Less 20% of the initial fee to cover administration  costs).